Of Birds and Bees, Oh My!

Tomatoes are blooming, trees are budding, and grasses are starting to develop teeny tiny little flowers. Turning all that blooming and blossoming into food can require the help of an army of pollinators. Well, not the grasses; the wind does the hard work for them. Don’t forget Timeless Natural Food® lentils and Black Butte Chickpeas®! They have gorgeous flowers that require a determined bee to get inside them. 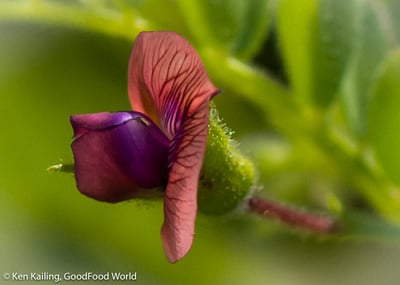 We think of flying insects most when we hear the word “pollinator” but there are hundreds of species of birds and mammals that are pollinators too. In fact, more than 100,000 different animal species - and perhaps as many as 200,000 - play roles in pollinating the 250,000 kinds of flowering plants on this planet.

Back to Those Spring Thoughts
Pollination is the process of pollen grains being transferred from the anther (or male part) of one flowering plant to the stigma (or female part) of another flowering plant of the same species. Fertilized egg cells grow into seeds that produce fruiting bodies, including the plant-based foods we consume.

Thousands of birds, mammals, and insects can transport pollen, but the most important are honeybees, which pollinate on a commercial scale. Honeybees pollinate many fruits and vegetables, including row crops, field crops, and tree fruit and nuts. According to the Organic Trade Association, pollinators, primarily honey bees, are needed to fertilize 75% of all food crops successfully.

Pollination is critical not just for the food we consume but also for foraging crops that feed the livestock we depend on for meat. It also contributes to the feeding of many other species in the food chain and the genetic diversity of flowering plants.

Each one of these “…cide” categories can harm beneficial plants, insects, small mammals, and fungi, while attacking those considered harmful.

Because the increased use of toxic pesticides has particularly affected wild and domestic bees, it’s important to note the ways organic farming methods can protect and promote the welfare of bees.

Less hazardous chemical exposure.
Exposure to toxic chemical pesticides and other synthetic toxins used in industrial agriculture is one of the greatest threats to bee health. Organic farming regulations forbid organic farmers from using synthetic pesticides and instead encourage them to use integrated pest management (IPM) techniques rather than toxic insecticides or cover crops and crop rotation instead of toxic herbicides.

Protecting bee habitat.
Bees need a wide variety of plants to collect enough pollen and nectar to sustain their hives. Organic farms tend to have a more varied environment with more flowering plants to sustain and feed bees because organic farmers are expected to operate their farms in a way that preserves and enhances natural resources. 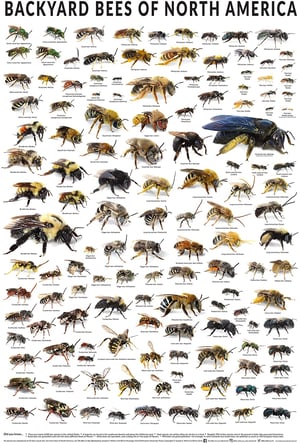 Why are bees in danger of extinction?
The honeybee is a familiar sight in woods and gardens worldwide, with its black and gold stripes, transparent wings, and trademark fuzzy body, however there are many wild bees that can be seen in your own backyard too.(Get a copy of this bee poster here.)

However, as bee populations continue to plummet, a planet without bees is becoming increasingly likely. The American Farm Bureau Federation reports that bee colonies have been declining annually since the 1990s, due to a condition known as "colony collapse disorder (CCD)," with some areas experiencing losses of up to 90%.

According to recent Harvard University research, pesticides, including the increased use of neonicotinoids, play a crucial role in the near extinction of the honey bee population. Pesticides can cause "impairment of honeybee neurological functions, specifically memory, cognition, or actions," according to the authors.

The study explains that neonicotinoids are particularly harmful to bees. Neonicotinoids can be used as a seed coating and a spray that is poisonous to all insects. When seeds are handled with neonicotinoids, the toxin enters plant tissue and is found in the nectar and sap of the plant, which bees consume.

This finding backs up previous research that found a correlation between crop chemicals and CCD. When chemically treated plants, such as corn, release pollen into the air, bees are often exposed to pesticides. Bees do not pollinate corn, but pollen from corn finds its way into flowers and other crops, exposing bees to these toxins.

Bees and other insects are an essential part of our agriculture systems, pollinating most of the food crops humans eat. We must support and encourage sustainable and regenerative organic farming practices to protect our pollinators and our food system.

Find out what you can do here:

Beyond Pesticides
Xerces Society, The Risks of Pesticides to Pollinators

If you have ever had some of our Black Butte Chickpeas®️ there is a chance that they were grown on...

You know what’s in Devon, MT? Not much by the standards of many. In this tiny little Montana...

Way back in the last century, Jim Barngrover was one of the founding members of the Timeless Seeds...