Since glyphosate was introduced in 1974, it has become the most widely used herbicide worldwide. More recently, it has become one of the most hotly debated, regarding food and farming safety. Despite the U.S. Environmental Protection Agency’s (EPA) stance on glyphosate safety when applied according to manufacturer’s instructions, thousands of lawsuits against manufacturer Bayer (who in 2018 purchased the original manufacturer, Monsanto) support 2015 findings by the World Health Organization (WHO) and the International Agency for Research on Cancer (IARC), which found a link between glyphosate exposure and cancer. In light of the evidence of cancer risk, organic farming practices are a safer bet for the environment, the farmer, and the consumer. 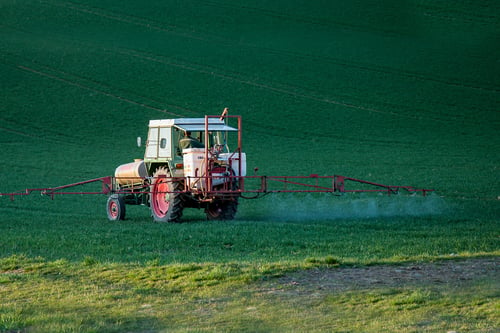 According to National Public Radio News (NPR) the 2015 findings by IARC were based on three main points. First, IARC found strong evidence that glyphosate can damage DNA in cells which can lead to genetic mutations. Second, mouse studies showed that animals consuming glyphosate had an increase in tumors. Lastly, IARC found evidence linking glyphosate exposure to Non-Hodgkin’s Lymphoma (NHL), a type of cancer. These findings led to several key California state and federal court decisions awarding multi-million-dollar settlements to people exposed to glyphosate and suffering from NHL. Those decisions are currently under appeal.

The evidence against glyphosate is strong. Business Insider stated that the IARC relied on 17 experts from 11 countries, which led to the substance being declared a Group 2A carcinogen. The report also cited analysis by the journal Environmental Sciences Europe that pointed out the EPA relied on unpublished regulatory studies, while the IARC looked mostly at peer reviewed studies. And, the evidence against glyphosate continues to mount. According to CNN, a University of Washington study referenced one analysis finding glyphosate to raise cancer risk by over 40%. Additional findings published in Mutation Research indicated a link between exposure to glyphosate-based chemical herbicides (GBHs) and NHL cancer.

In addition to avoiding paying out high-priced court awards, Bayer (formerly Monsanto) has additional incentive to appeal court decisions related to findings that glyphosate causes cancer. The herbicide and genetically engineered glyphosate resistant seeds they market are big business. American farmers are currently caught in a cycle of dependence; purchasing seeds genetically engineered to resist glyphosate, while also purchasing glyphosate to control weeds that spring up in spite of its use. BeyondPesticides.org reports that 93% of soybeans, 82% of cotton, and 85% of corn currently planted in the U.S. are engineered to be glyphosate resistant. The source adds that studies from the USDA indicate that as the percentage of weeds resistant to glyphosate increase, use of the dangerous herbicide has also been on the rise—and so have health concerns. BeyondPesticides.org notes that U.S. Geological Surveys (USGS) studies are finding glyphosate in air and water samples. In addition to previously mentioned links to cancer, glyphosate has been linked to a variety of additional health concerns ranging from ADHD to hormone disruption.

In the face of these dangers, organic farming practices remain a viable alternative to the glyphosate dependence cycle. Planting pulse crops, such as peas, beans and lentils reduce the need for synthetic fertilizer, relying on the soil’s microbiome and nitrogen-fixing bacteria to convert atmospheric nitrogen to organic nitrogen compounds utilized by plants. Other organic practices such as crop rotation support the soil and disrupt weed habitat. Planting cover crops replenish soil and prevent soil erosion. Practices such as intercropping (planting two or more crops simultaneously in close proximity) also can help break dependence on synthetic herbicides and facilitate safer agriculture practices.

Farmers who embraced IARC and WHO findings about the links between glyphosate and cancer, and have had additional concerns about health and environmental risks have already made the move to organic farming practices. That number continues to rise. In 2019 the Pew Research Center reported USDA statistics showing more than 14,000 certified organic farms in the U.S. in 2016. That’s a 56 percent rise from 2011 data with a proportionate rise in sales of organic products. In April, MarketWatch.com reported that larger national brand manufacturers are following suit.

All over the country organic farming advocates, such as Pennsylvania’s prestigious Rodale Institute which has been publishing research in organic farming for the last 50 years, are promoting growing crops without the use of synthetic herbicides, pesticides or fertilizers. A recent Rodale blog outlined agricultural practices supporting healthy soil, crop rotation, and use of non-synthetic herbicides, pesticides and fertilizers when needed. There’s plenty of science and statistics to support that organic farming practices can be viable alternatives to synthetics. The time is now to choose safer options for America’s agriculture and keep in pace with American’s growing demand for organic products—making going organic a safer bet for all.

Doug and Anna have grown crops for Timeless Seeds for many years. What sets their farm apart is...

While this year's holiday meals may look slightly different, we all look forward to something sweet...

This family-oriented mother of two brings a lively spirit and fresh perspective to our warehouse....