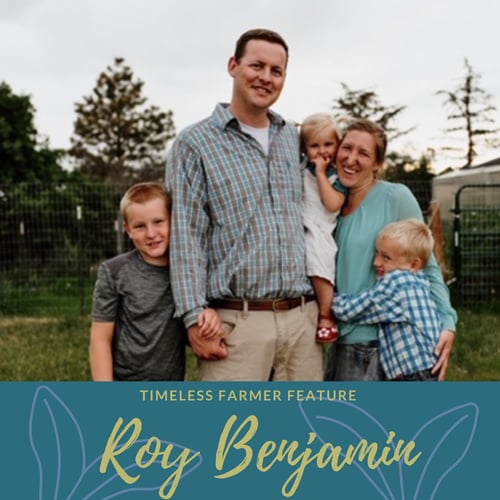 You know what’s in Devon, MT? Not much by the standards of many. In this tiny little Montana Hi-Line community, you will find a small two-room schoolhouse, thousands of acres of farmland, and a whole lot of heart.

In 1910, John and Laura Benjamin along with Tucker and Evelyn Duncan put down roots in this community. The evolution of two couples’ agrarian decisions now equates to 14 households of descendants farming in Montana. That is pretty impressive. Roy Benjamin and his wife Kaylee are among those families carrying on the farming legacy.

Roy knew he wanted to farm as long as he could remember. As a child he would beat his dad to the door when it came time to run errands or get out in the fields. Like many farm kids, he was quite adept at running equipment by an early age.

As years passed, many of his classmates were setting off to college, but Roy’s sights were set on 3 things: farming, getting married, and raising a family. He accomplished all of those things over the course of the next few decades.

Historically, Roy's family farmed using conventional methods. However, Roy determined that organic practices were a more sustainable way to enter his farming career. Using chemicals was just not an economically viable option for their family at that point in time.

Today, he is thankful to have found a solution that works for him and simultaneously avoids exposing his family to harmful farm chemicals. He has a holistic approach and uses nature's ways to his advantage.

As a way to contend with weeds, he promotes weed germination on his own terms, then cuts them down before seeding his field. This insightful implementation allows him to feed his crop as he plants it, and in general leaves his fields 80% weed free during the growing season.

Roy shares, “Consumers would benefit from knowing where their food comes from. There is a family at the production end of every carton of milk or bag of lentils. We provide a product that we would be proud to eat. If we would not eat it, we won’t send it. Our consumers are getting something safe, clean, and fresh.”

We are proud to have this gentleman and scholar among the ranks of our growers. He is a fine example of the character and work ethic that emerges from small town living.

Thanks, Roy and Kaylee, for all you do!

The picture you see here is that of legacy: Corban Honey’s three boys working in the fields just...

This year, one of the most impressive crops of lentils we’ve ever seen came from the fields of...

Tenacious describes the people who know what they want and go for it. The Johnson farm celebrates...