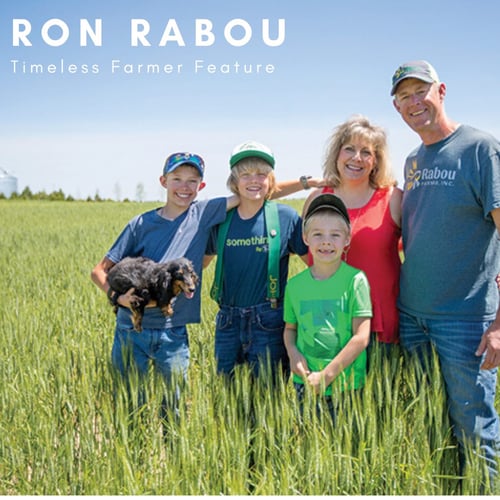 If you ever have the chance to visit with Ron, you will walk away inspired and ready to take on the world. In 12 years, Ron has liquidated 85% of his possessions, learned to farm, started a farming operation from scratch, amassed 8,000 acres of organic ground, written two books, and started a public speaking career -- all while raising a family with his wife, Julie.
Ron's response to that list would probably be a chuckle and a "I don't sleep much", but the Rabou operation today started with adversity and a leap of faith that would forever change the course of Ron and Julie’s life.

Ron was a 5th generation cattle rancher; the trouble with that was he hated every bit of working with cows and horses. He always knew that he would be closely tied to agriculture but in a different capacity. Ron became a state officer for FFA, but still periodically helped his dad with the cows.

On a day like any other, Rob returned home to help his dad but it would be the last time he would work with his father. Ron’s father collapsed that day while working the cattle and passed away, despite Ron’s efforts to save him. After that tragic day, Ron purchased his dad’s share of the ranch, quit his job, and became a cattle rancher. By default, this put Ron in business with his father’s family.

Despite his lack of enthusiasm for animal husbandry, this seemed to be the path his life would take after his father’s death. For three years, Ron held on through crippling levels of animosity and distrust that existed within the family operation in order to keep the amount of ranch equity apportioned to his side of the family. One day, he looked at his wife and decided enough is enough.

Ron and his wife took the loss and moved to his grandfather's place where they began farming 800 acres with tractors built in the '70s and '80s, old equipment, and no knowledge of how to farm. After falling on their faces and taking another off-farm job, Ron decided to take a step back and make a new plan; one that included selling off 85% of what they owned and starting from scratch. Forged from a staggering amount of hardship, this path turned out to be the way to freedom.
If you ask Ron how he built his farm from the ground up, he will not immediately pontificate about acreage, yields, rain, and the price of wheat. He will instead tell you it was by relationships, communication, and trust -- and most of all, a gift from God.
His life experience has taught him that human spirit is invincible. And when you make up your mind to make hard decisions with pure intention, the sky's the limit with what you are able to accomplish.
“It’s not the circumstance that we find ourselves in that holds us back, it’s how we deal with those circumstances," Ron shares. "The question to ask is, 'How can we change circumstances for good; for ourselves, for our families and for our future?' While our farm is incredibly important for our family, we have to keep the perspective that it is what we do, not who we are inside.”
These are inspiring words to live by no matter what you do for a living.
Thanks, Ron, for all you do!

John has been farming in Montana for 13 years, switching to organic in the last three. Read why...

Ole is a man with many "irons in the fire" so to speak. Balance, change, respect for all farmers...