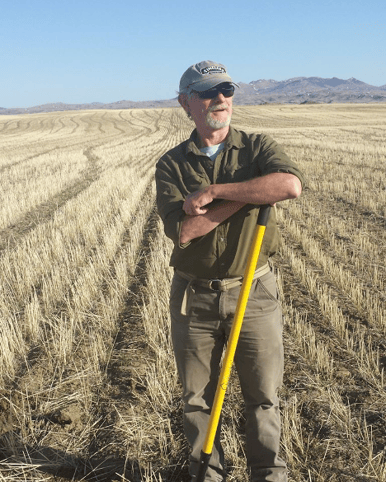 For those of you who don't know, this is Jim Barngrover. Jim is our Procurement and Grower Liaison and a co-founder of Timeless Foods.

"I have a disclaimer to make: My father was exposed to a highly toxic pesticide, parathion, while in his late 20's,” Jim said. Parathion was applied aerially for the control of wire worm in sugar beets.

“Upon exposure he began to show symptoms of early onset Parkinson's Disease.”

Jim grew up watching his father having to struggle with the physical challenges of farming and the eventual loss of a farm. For more than 40 years Jim’s father succumbed to the deterioration of Parkinson’s Disease.

“You can bet it has shaped my life and my relationship to pesticides," Jim states.

For Jim, this is a big part of his "why.” Jim is a committed advocate for organic farming and understands the urgency of sustainability based on this direct impact on his life.

Are you a farmer that has been directly affected by chemical exposure? Tell your story. Use your voice. Change this world.

Doug and Anna have grown crops for Timeless Seeds for many years. What sets their farm apart is...

Jody transitioned his farm to organic in 2007. He was recently asked what he would like people to...

John has been farming in Montana for 13 years, switching to organic in the last three. Read why...