In terms of farming, Craig Schmitt is a bit of a "new kid on the block" in the Timeless community. During the better part of the year, he is a Hydraulic Engineer in Arizona with a wife and two kids in high school. These days, his interests bring him seasonally back to his -- now 3rd generation -- family farm in Montana. It took years to transition from his families conventional growing methods to the organic crop that will emerge this spring. 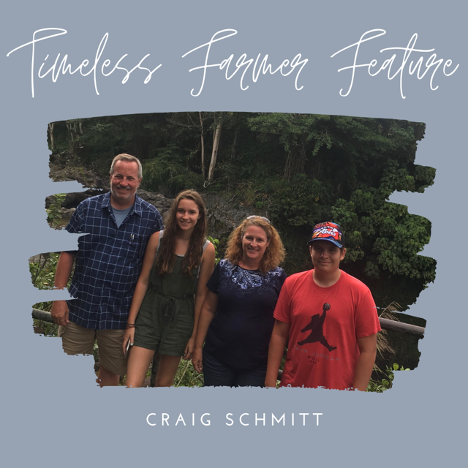 The decision to go organic happened when looking at the numbers. Over the years, he would help his father with spreadsheets for the farm.

"As a project manager, I would never approve a project with such small margins," he recounted.

That's when the serious research began. Craig poured himself over books and articles about how to farm organically and found that not only are the margins better, but the end product is more nutrient dense. This will be his first year of growing certified organic and we couldn't be more thrilled for him.

This former Aerospace Engineer is bringing his no-nonsense analytical skill set to the table in his eventual goal of continuous cropping no-till organic farming. While focused in his efforts, he's standing on the shoulders of those who have gone before by consulting with his dad, who is nuanced to the sub-climate of the region, and reaching out to long time organic front runners, the Rodale Institute, for their expertise in how to make this a reality. His crop rotation will be lentils, cereal grains and hemp.

Craig is excited to see the momentum growing around organically produced crops. He would like our end consumers to know that,

"You can trust the organic certification label. There is a lot of attention to detail and work that goes into making a certified organic product."

Welcome Craig, to the Timeless community!

What two things do a banker, pilot, mechanic and physical therapist all have in common?1. They’re...

"My wife made me sign a prenup before we moved back to the farm 5 years ago," Glen laughed. "A part...

A visit to Quality Organic Farm entails driving nine miles down a gravel road, most likely without...