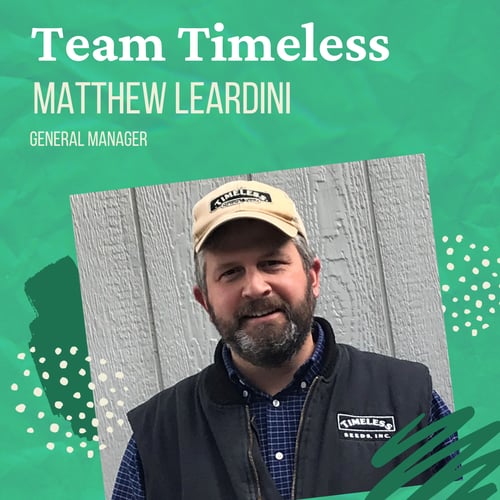 One of the great minds that keeps our numbers on track, our forecasting reasonable, and keeps us glued to our mission statement is our General Manager, Matthew Leardini.

Matthew grew up in Northern California where he kindled a love of agriculture working for local dairy and cattlemen. At 17, he drove to Montana to work for a ranch in the Bozeman area until his Freshman year began at MSU-Bozeman. He continued to work for (and reside on) a ranch during school which allowed him the freedom and flexibility to attend school while committing to weekend/summer work.

After he finished college with a degree in Agribusiness Management, he set his sights on attending Air Force Officer Training School in Alabama. Following completion and marriage to his lovely wife, Michelle, they embarked on three assignments to New England, California, and his final assignment that brought them both back to Montana.

Matthew was inspired by the caliber of people he encountered during his stint in the military. The world became a smaller place when he worked alongside a space scientist who had worked on the Apollo 13 mission and had the honor of meeting and visiting with several Tuskegee Airmen on several occasions, whose profound stories inspired him as he continued to serve. Matthew reflects often on the great opportunities and experiences too numerous to list including being a donor for the DoD Bone Marrow program.

After his military service, Matthew and his family decided that Montana was home. They settled their roots and Matthew sold pulses...but not for Timeless! We would eventually cross paths years later when Matthew reached out to our principal founder, David. He keeps us proactive, develops forecasts, and fights to meet the needs of all of our stakeholders.

Prior to Timeless, he and his family hadn’t put much thought into eating regeneratively-produced organic food. However, what he has learned from growers, industry leaders, forums, lectures, and conversations with leading professors and agronomists has affected his family's eating habits to reflect a more healthy approach.

Matthew is particularly proud of the fact that Timeless has a good reputation for paying our hard working growers above industry average and our continued pursuit to find and build stable markets to help ensure a more consistent price that is less affected by traditional market impacts. Timeless contracts crops from organic family farms, cleans it, packages it, and distributes it with confidence to consumers across the country and around the world.
Thank you, Matthew, for all you do! We are thankful for your contribution to Team Timeless.

You know what’s in Devon, MT? Not much by the standards of many. In this tiny little Montana...

The picture you see here is that of legacy: Corban Honey’s three boys working in the fields just...

Regenerative Agriculture: A New Name for an Ancient Practice

Any good relationship involves a certain degree of give and take. Farming is no different. As...